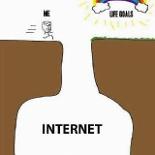 mpreg
My friend amber told me something she saw that scarred her the other night one day, and we were on the swings talking about It.

Then Melody came over to ask for the swings. When amber said she couldn't have her swing melody ran and came back ten minutes later and was complaining.


I mean SERIOUSLY Melody! Amber saw something absolutely SCARRING and your complaining ABOUT A FRIGIN SWING.
reply
Subscribe
on June 28, 2015
Report

ellotherelove
When people try to correct everything they don't like about me.
reply
Subscribe
on June 18, 2015
Report

I MEAN, SERIOUSLY, IF YOU KNEW MATH IT WOULD BE DAMN 19! DX
reply

NeonTiger
What's DEEZ Nuts? Sorry i know i am being a clueless person XD but i dont watch vines.
reply

Hogwarts_Huntress
1. Back-stabbers
2. when people don't shower for more than 3 days
3. interrupting
4. when people get up in my personal space ("Don't pop the bubble people")
5. People that make obnoixious noises when they know that people are annoyed, and they keep doing it even though people told them to stop
4. B.O.
7. when people complain about something, even though they know it's worse for the person they're talikng to. See More▼
8. attenion seekers
9. when people lie about things that they, and everyone else, knows is true
10. When people don't realize other people are in pain
11. people acting like they're parents/families are the worst to live with because they don't get everything their way
12. liars
13. braggers
14. people who think they're popular, but really they're mean and exclude people
15. people who don't give second chances, and judge someone by their past
16. non-sharers

BasicCactus
DEEZ nuts.... I swear if I have to hear it one more time I'm going to scream. T_T
reply

mpreg
List of people, or things people do, that's annoying:
1. One uppers
2.lies about life
3.crybabies
4.drama queens
5.chew with mouth full
6. Talks to you like you're 5 and talks like they're 5 See More▼
7.gets all up in your face while they're talking
8. Goodie goodies
9.teacher's pets
10.bossy people
11.people who never talk even when you're asking a question
12.people who literally have visible burgers in their nose and don't blow their nose
13.people who act like they're 'all that'
14. people who do yo mama jokes
15.people who do any other stupid jokes
16. People who self pity ALOT LIKE NOT EVEN A LITTLE
17.people who can't take a joke
18.copycats
19.braggers
20.and most of all..PEOPLE WHO DO ALL OF THESE THINGS

mpreg
Yeah like they aren't even funny. And i don't like that people joke about their own moms...?
on May 24, 2015
Report

NeonTiger
High-five. I hate yo-mama jokes as well. They're just plain rude and offensive. I mean, who cares?
on May 24, 2015
Report

mpreg
When people one-up me


Like yesterday I was telling how I got a scar on my forehead (I got hi by a car door) and my friend says she got hers by getting hit by the trunk door and falling down and cracking her head open.
And the worst part was, she one upped me on this when we were telling the teacher! Who does that??!!
reply
Subscribe
on May 23, 2015
Report

mpreg
When I stup my pinky toe on the wall

And when I take a step and it starts hurting randomly
reply
Subscribe
on May 23, 2015
Report

Me: SHUT THE F UP NO ONE WANTS YOUR NUTS!

lizzruano
@KangarooRatNarwhalBlobfishHybrid the vine isn't that bad, its funnier xDDD
on May 24, 2015
Report

Adderstar
When people say YOLO waaay too damn often. I just say "Only once, do you live," in a Yoda voice whenever I hear someone say that. Don't ask, I dunno either.
reply

Ducki
@sisaloofafump or Kenny from South Park xD
I say EBOLO >:3 (NigaHiga reference)
/I'm only including actual humans/
on May 24, 2015
Report

threebeltking
You only live once. Unless your a time lord. Or Leo Valdez. Or practically every anime character in existence. Or Jack Harkness. Or ... The list goes on. Ad since I am a timecard, when I must, instead of saying YOLO, I say YOLAMTAYR. You only live as many times as you regenerate.
on May 22, 2015
Report

JesusFreak14
I don't like it when people say yolo. Cause it basically means you can be super frickin stupid. I always say yah, you only live once, SO DONT FRIKIN WASTE IT! lol
on May 22, 2015
Report

seippup12
Hashtags...... Every time I hear it I'm like GOD TAKE ME NOW
reply

SnowClan
When people don't use the right your/you're or there/their/they're or don't use apostrophes or capitals where they're supposed to, or they just use random periods. I'm a grammar freak

And a bitch
reply

SnowClan
Also, I scream when people say/type wolfs.
on May 12, 2015
Report

the_sky_boi
When people say directions to do something and one person is like "what are we doing again?"
reply

SnowClan
When people pronounce things the "American" way (they don't bother to pronounce it like people in that country do if it's something like a name of a place, don't mean to be offensive I myself am an American) like when people pronounce Chile like chilly, it's really chee-lay
reply
Subscribe
on May 08, 2015
Report

gothicskittlescupcake
People who self pity
reply

SnowClan
Saying "You throw like a girl" or anything like that. I just want to rip their flabby arms off and beat them with them. Or using stereotypes like that dresses are girly and that sports is a boy thing
reply

GalacticBiRavenclaw
There's this woman I know, and she tends to use certain words/phrases A LOT. Here they are:

Here's a sentence that she uses ALL THE TIME: See More▼

"I'm not tryin' to be mean, but I really think you should get to work... your mom was kinda clear on what she wanted you to do, so... my boys are doing their work over there."

Except I'm ALWAYS doing my work; she's so dense that she can't tell an apple from an orange. That sounds kind of mean, but I'm serious. Also, her breath stinks. She's nosy. She tries to be funny but sounds stupid (wait, she doesn't only sound stupid; she IS stupid). She's desperate for my attention.