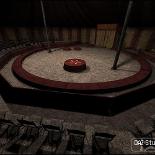 Orange.Soda
X3
Mine does to, but her hair is straight and has yellow eyes
*it looks like when they dress Ciel as a girl x3*
on December 08, 2015
Report

Sun_and_Moon
Joker: *sighs* I lost most of my emotions to them, I even forgot how to cry *laughs* That's why I laugh all the time, which is my name is Joker
on December 10, 2015
Report

Sun_and_Moon
Joker: *sits on Quinn* Yeah, they would die of laughing if they knew how I looked, acted, what I do, that I'm alive, and a whole lot of other stuff *laughs*
on December 10, 2015
Report

Sun_and_Moon
Joker: *mutters* my parents would have laughed if my real leg got bitten off
on December 10, 2015
Report
There are 74 more comments. Show ▼
Subscribe
on December 08, 2015
Report 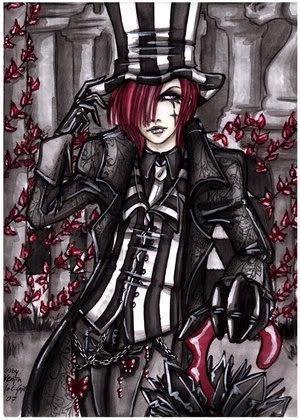 Sun_and_Moon
Name: Joker
Gender: Girl
Species: Human
Age: 18
Looks: A black and white shirt with a big black ribbon around her neck, thick knee high Gothic boots, shredded black and white jeans, long black nails, and piercings
Backstory: Born in a proper family, she and her brother never really had a good time as a child. One day, someone lost control of a carriage, stopping it caused the loss of her leg. Her parents couldn’t handle her with one leg, so they threw her out, but her brother See More▼ came with her. They lived in the streets for a long time, but came up with the idea of making a circus. In the middle of her act, she was taming a tiger, telling everyone to be silent as she placed her arm in the tiger’s jaws, but someone purposely made a loud noise, causing the loss of her arm.
Friends: No one yet
Family: Mad Hatter, parents threw her out
Talent(s): Juggling, and animal taming
Likes: Animals, darkness, a full house, the Circus, dolls, and music
Dislikes: People who mess up her act, jerks, and really loud noises
Other: Nobody knows her eye color except for Mad Hatter, no one knows her real name. She doesn’t have her right leg or her left arm, so she has prosthetic's. She is Second RingLeader in the Circus

Name: Mad Hatter
Gender: Male
Species: Human
Age: 19
Looks: Picture
Backstory: Born in a strict family, he never had a real childhood. After Joker lost her leg, their parents threw her out, but he followed. Refusing to let his little sister live alone in the cold world. One day, someone tried to take Joker away, so he attacked him, losing his eye in the process. Which is why he covers it with his hair.
Friends: No one yet
Family: Joker
Talent(s): Juggling, and magic
Likes: Music, his sister, and his Circus
Dislikes: People who makes fun of anyone in the Circus, and jerks
Other: He never leaves his sister behind, and protects everyone he can, even though he is cold, and emotionless. He always has his umbrella and uses it as a cane. Main RingLeader
reply
Subscribe
on December 08, 2015
Report

Orange.Soda
Name: Rose
Gender: Female
Species: Dark angel (demon & angel... Nobody knows unless she shows wings)
Age: As old as the Dinos ^.^ (appears 16)
Friends: they all died...
Family: Satan and Lila ^.^
Talents: ability to control the dead *its her job, SHHHH*, scythe wielder, acrobatics, Magic wielder, the usual See More▼
Likes: Cake, sleep, and silence
Dislikes: ignorance, she's bacically Ciel... ^.^
Other: She joined to seem normal... And to stay hidden from enemies, a bit crazy at times, usually silent... Again, bacically Ciel but not human and a female.
reply