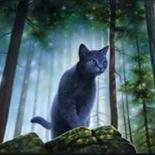 ravenspirit892
Is this page dead???
reply

ravenspirit892
Name: Willowleaf
Age: 36 moons old (3 years in cat so young adult)
Looks: spruce blue eyes, smoky gray fur with white flecks in it, she has extra fluff on her tail and chest, she also has a white mark on her forehead that kinda looks like a leaf
Personality: she is kinda shy when first meeting new cats, but she is generally wise, spirited, and caring. She is also very sensitive to others feelings, which can be a good and bad thing sometimes, she may seem soft to cats who don't See More▼ know her but if anyone she loves is threatened she will become very 'cold' and harshly honest to whoever is threatening.
Clan: ......
Mate: none..... yet
Likes: hunting, swimming, keeping the peace (but will fight if needed), helping the med cat from time to time
Dislikes: arrogance and needless fighting
Extra: She used to be a med app and was very good at it but for unknown reasons she started training as a warrior. She became a warrior but still has a very strong connection with Starclan. She has no siblings so she has always tried to make her mother proud and still does even though she died of greencough......her father is unknown.
reply
Subscribe
on July 07, 2020
Report 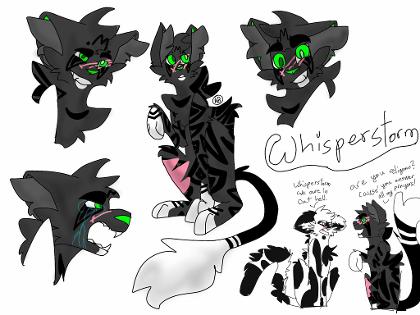 PrismIsLynx46
(My old oc was wack so here’s my new one)
Name: Whisperstorm
Age: around 4-5 years at death
Looks: Pic I drew
Clan: Riverclan
Mate: Rushwhisker
Likes: herself, fish, her siblings, her father, fighting, hunting, her mate, her kits, night, water, trees, birds, cold See More▼
Dislikes: mice, betrayal, Starclan, climbing, heat, enemies, two legs, thunder path
Gender: she-cat
Extra: her father is Emberstar and her mother is Ravenshadow. She has two siblings, Foxdance and Silentstar. When she was a kit she and Foxdance fell into a river and got swept away. Foxdance ended up in ShadowClan and became a warrior. She became a rogue. She got reunited with Riverclan later on. Her mate is a med cat. She later swore revenge on the WindClan cat who killed her father. Landing her a place in the dark forest.
reply
Subscribe
on September 27, 2018
Report

Rainecho yawned, she stretched and padded out the warriors den, she sighed as her whiskers twitched. She sat down looking around Shadowclan’s camp
reply
Subscribe
on September 27, 2018
Report

your.cool.grandma
Name: Twigleap
Age: 14 moons
Looks: Twigleap is a small, fluffy, brown and white Ragdoll//will post pic//
Personality: He’s rambunctious and loud, and has trouble staying still. He’s gullible and will listen to anyone, even if he’s in danger.
Clan: ShadowClan
Mate: none
Likes: He loves to climb trees and his favorite prey are frogs. He loves to play with kits. See More▼
Dislikes: Kittypets, his old mentor(Lichenclaw), kits in danger
Gender: Tom/male
Extra: He has no siblings. His parents are Poppytail and Tornlip.
reply
Subscribe
on August 14, 2018
Report

Sarcastic_Newsie
Name: Waterstrike
Age: 4 years and 2 moons
Looks: grey-blue pelt with hazel eyes
Personality: sneaky, sweet, and a trickster
Clan: Riverclan
Mate: N/A
Likes: Fish, Rabbit, and sneaking through other clan territories See More▼
Dislikes: getting caught in another territory
Backstory: was born to a Loner dark grey she-cat on the border of Riverclan and was taken in by a orange tabby queen
Gender: Female
reply
Subscribe
on July 14, 2018
Report 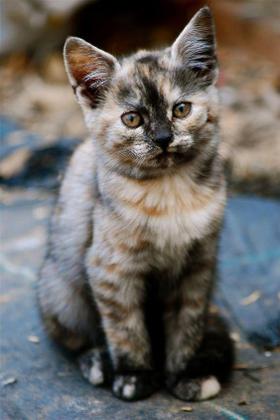 Imahuman
Name: rainpaw
Looks: Tortoiseshell with amber eyes
Gender: she- cat
Clan : riverclan
Mate: NA is a apprentice
Likes: family, friends, elder stories, helping.
Dislikes: shadowclan, eagles, volepaw, tow-legs, kittypets See More▼
Mentor: none
Has no parents they abandon me has no siblings. My parents abanded me on riverclan side then riverclan boarder patrol found me and took me to there clan. Has the name of rainpaw cause they found me on a rainy day.
reply

Imahuman
Rainpaw will actually be in Shadowclan and will be named Rainecho
on September 27, 2018
Report
Subscribe
on January 18, 2018
Report

PrismIsLynx46
Anyone want to RP?
Clawstar: *walking down the border of Riverclan and Shadowclan*
reply

Imahuman
Rainpaw: * sits near edge and watches water splash on paws. Gets up to go eat and sees volepaw battle training with his mentor mosssplash*. Sigh if only I had a mentor. Is about to go help the elders clean there den volepaw comes up and says “haha rainpaw cause you don’t have a mentor you have to help the elders and clean there beds”. I Unsheathed my claws and See More▼ growls at least I love helping the elders. Walks to the elders den tail high up and smiles.
on January 18, 2018
Report

PrismIsLynx46
Clawstar picked up the small minnow she caught and brought it back to camp. Prey has not been running well lately, Clawstar was concerned. Her fiery amber eyes pierced with worry. She padded into the Riverclan camp, dropped the minnow in the fresh kill pile, and settled down with her best warriors: Nightfang, Stagfade, Clawheart, Blackbreeze, Sandshadow and Fallensoul. See More▼ But then a yowl came from the barriers of camp. A cat smelling strongly of Thunderclan burst into camp, he had brown fur and sharp hazel eyes, and his scent was tinged with fear and blood. “Thunderclan is under attack! Foxstar sent messengers to all clans!” He meowed before fainting in a pool of blood.”
on January 11, 2018
Report

cockk
She sighed. “How much longer now? I mean, I’d just like to actually have the kits.” She mumbled. Swanfall stood, and turned. She wobbled back into the nursery, she was tired. “See you later, Gorseleaves.” She purred over her shoulder, and curled up in her comfortable nest, towards the back of the den.
She woke up. A sharp pain in her belly told her a lot: See More▼ She was kitting. She limped out of the nursery, and passed the note on to her mate, who pelted away to the medicine den. She lay in the soft moss of the nursery, and waited. The medicine cat came, ((let’s just skip the kitting process.))
She started down at three, small, beautiful kits. She had done it. “We’ll name them later, can I rest now?” Swanfall yawned. Gorseleaves nodded, and lay down beside her, to watch his kits.

Cr0wMercenary
Name: Heronflash
Age: 13 moons
Looks: https://www.qfeast.com/page/ok3pCY/Matthew-s-Drawings/photo/ZR8FMo
Personality: Optimistic,quite silly in most situations
Clan: Riverclan
Mate: N/A (gAYY)
Likes: Trout,basically any fish,his siblings,parents,and his clan and quite literally almost everything. See More▼
Dislikes: very few things.
Backstory: Born to Daisystem and Troutsplash along with three other siblings he grew up fairly happily. His kithood was good,along with his apprentice moons. His father had passed from greencough before he had become a warrior and his mother fell ill a while after he and his siblings had become warriors. Heronflash was given his suffix after his mentor remarked during a hunting patrol that his paws had been quick as a flash when he scooped up fish. (i'll prolly think of more backstory stuff laterr,i'm lazy)
Gender: Tom/Male
reply
Subscribe
on January 05, 2018
Report

cockk
Anyone wanna rp? My bio is way too long :0
reply

cockk
Name: Swanfall
Age: 15 moons (months)
Looks: Swanfall is an albino she, with thick, fluffy, soft fur. She has a long scar carved into her tail. Her amber eyes are bright, and she looks extremely tidy.
Personality: She is rude, and over protective over herself. She is loyal despite, and would (surprisingly) jump in mud to save a clanmate in need.
Clan: ShadowClan. (She does contain kittypet blood, by her aunt.)
Mate: Gorseleaves - An intelligent, light gray Tom. He is swift, and See More▼ gentle. He knows when to back off. He has bright green eyes, they have had three kits by the names of: Vizkit, Ryekit and Clawkit.
Likes: Swanfall likes birds of prey, since they are apparently cleaner than rats, mice, voles, and frogs, in her opinion. She also likes being cheered onwards. She likes feathers that line her nest.
Dislikes: She hates water, mud, and brambles that can tussle with her fur. She hates rats, because in her opinion they smell foul.
Backstory: She was named Swankit for her fluffy, smooth white pelt, and her temper. She would snap at others when they touched her after a good washing. When at her apprentice ceremony, she refused to touch her mentor's nose, sparking amusement and disgust within her clan mates. She hated her mentor, and in her first training session, fell into the lake, where her mentor laughed at her, though it was leafbare. Her training continued on, improving each day, until her warrior ceremony. She was named after her fall into the lake, hence the suffix ‘fall’. This annoyed her, and her vigil was a cold, new leaf night. She didn’t mind this.
Gender: Shecat/female
reply
Subscribe
on January 05, 2018
Report

Unknown_Lock
Name: Fallenstar
Age: 22 moons
Gender: She-cat
Looks: Brown tabby,with forest green eyes, a gray stripe middle of her tail and it broken there.
Personality: Stubborn,loyal,wise,kind,brave,and protective
Clan: Midnightclan
Mate:Spottedear: A white tom with brown spotted ears See More▼
Likes: Clan-mates,hunting,watching the sky, and their previous leader
Dislikes: Unknownclan, betrayers,kitty-pets, and leaf-bare
Backstory: When Fallenstar was just a kit. She had no name, but as she opened her eyes she started to climb. Yet she always fell down making her name Fallenkit. When she became Fallenpaw she was chosen to go to the Starclan stone, but her tail got ran over in the middle of the gray stripe on her tail and it looked like a Fallenmoon which was her warrior name.
reply
Subscribe
on January 05, 2018
Report

HeatherWishes11
May I join some RP? Or how does this work idk:-O
reply
Subscribe
on May 21, 2017
Report