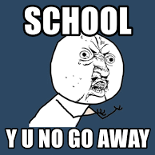 SoulessSorrow
My mind is mush from school. I wish we had those pills from The Wizard of Oz books.
reply

Irrelevant
I can kind of get why you're thinking it's like abuse, because teachers can literally be abusive towards their students I've literally dealt with that three times. However, school is a tool to educate children and help them build a path to get a career of their choice. Some kids choose to drop out and that's fine, other kids go on and have a lot of stuff going on. I was a victim of emotional/mental abuse so I guess my abuse doesn't really count, but going to school isn't abuse. See More▼ It's meant to help you in life, and if you're teachers are being mean report them.


My mom reported my kindergarten teacher for refusing to call me by the correct last name. Saying I wasn't adopted therefore it never happened. My mom also reported my second grade teacher who tried to force me to eat something I was allergic to because she was tired of my lying (never lied to her, but after that I did so I could avoid the situation next time). I didn't report my 5th grade teacher tho, she just moved on her own. She constantly blamed me for everything and when I started growing out my hair I had to keep it out of my face or she wouldn't acknowledge me. I would raise my hand she'd look at me roll her eyes and turn away. 5th grade was the spike of my depression ngl, I was being bullied by 3 kids and their friend group, everyone loved throwing things at me, and the girl I called my cousin convinced people I was dangerous. That led to my teacher treating me badly, I got my first detention from her for 3 late assignments. I was forced to sit inside for recess on time because I "forged" my dad's signature (which I didn't do and my mom told her I didn't, but she didn't care she literally said "Your mom told me you didn't forge but you're still staying inside because you don't deserve to go outside". She removed my best friend, the only reason why I survived in that class out because she saw how much fun we were having during recess and she claimed he was bullying me, and she moved my bully into my class.
reply

Little_lost_Alice
I hope she got fired
on October 23
Report

Irrelevant
@Little_lost_Alice She tried feeding me someone I was allergic to and I had no epipen and a hospital was a good ways away.
on October 23
Report

Little_lost_Alice
I had a strict kindergarten teacher that would yell a lot but I moved schools and I don’t know what happened to her
on October 23
Report
There are 3 more comments. Show ▼
Subscribe
on October 19
Report

Lil_Blossom
school sucks. School was my favorite place because I got to get away from my parents fighting and stuff, but now, it makes me want to die
reply

Lil_Blossom
@SoulessSorrow you see, I did not grow up with technology, I grew up with a huge imagination, and I still have it
on October 23
Report

Lil_Blossom
@SoulessSorrow yeah, me too. Me and my sibling understand what you have to do, so we just play it in real life
on October 23
Report

SoulessSorrow
@Lil_Blossom No, I just watch memes on youtube.
on October 23
Report

Lil_Blossom
@SoulessSorrow have you played among us before?
on October 23
Report
There are 67 more comments. Show ▼
Subscribe
on October 19
Report

PaRappa
I mean, I'm a victim of ab*se and school really isn't that,,,,
reply

PaRappa
I think you may be overthinking school as ab*se.
reply